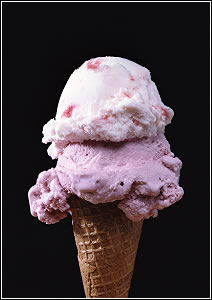 In 2011, an estimated 1.5 billion servings of ice cream were sold to pleasure-seeking Americans. During the same year, an estimated 350 million doses of alkyl nitrites (poppers) were taken in the U.S.

hat nice, polite couple next door. Your colleagues at work. You boss even. Quite possibly, anyway.

For well over thirty years now, poppers have appealed to people from all walks of life.

A series of interviews conducted by the Time magazine and the Wall Street Journal in 1978 revealed a wide spectrum of users, including construction workers, a "trendy East Side NYC couple", a Los Angeles businesswoman "in the middle of a particularly hectic public-relations job", and clubbers amid "flashing strobe lights and the pulsating beat of music in discos across the country".

Ten years later, in 1988, a study by Lange, Haertzen and Hickey estimated that poppers accounted for 11% of the entire American recreational drugs market – and that was before the internet.

One long-standing poppers vendor estimated recently that there may be a total of 3-4 million bottles sold worldwide every month – if true, that would be roughly 100,000 to 130,000 bottles every day, or 4,000 to 5,000 bottles sold every single hour!

Not that most people bother to conceal they enjoy the odd pop – least of all quite a few high-profile celebrities. Yup, here comes the gossip part of this article you've been waiting for :-)

“I wasn't even driving, bitches!”

That was the alleged response by George Michael in March 2006 to police who found him in his (parked) car enjoying some poppers. 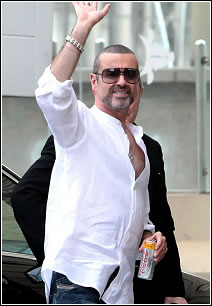 "It's just who I am," explained George Michael.

Anyway, the cops had first thought the substance in the signer's possession to be illegal GHB (liquid ecstasy), only to discover later it was in fact "legal amyl nitrite". Unfortunately for George, the cops also found some pot, for which he was arrested and received a caution.

The star later shrugged off the incident—and his hedonistic ways in general—simply stating "it's just who I am".

We know, George. But... Did we really need to know a guy took a whiff of amyl in a car park? Apparently so – or at least that's what the British tabloid media would have us believe.

That was the sensational headline we were treated to a couple of years later, in December 2008, courtesy of the British tabloid Daily Mail. 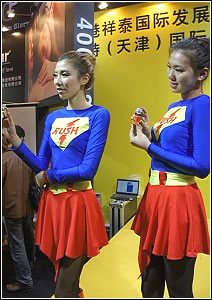 On a side note, poppers have become a hit in China in recent years, especially with women (so I was told). The photo of the "Rush girls" was taken at a Shanghai trade show.

One of their paparazzi managed to take a snap of the British supermodel entering her house with a bag of scented candles and—guess what!— clutching "two bottles of what could have been amyl nitrite".

The story was considered so newsworthy it was quickly picked up by media around the world – even China Daily, a Beijing based paper, found it necessary to explain to its readers what exactly the substance was that Kate bought for a night in with her then boyfriend (now husband) Jamie Hince.

“Cooking and sex go hand in
glove like tomato and basil.”

So said Gordon Ramsey, the highest-earning chef in the world. The fact he likes to use poppers during the latter activity only came out as the media got a sniff of his seven-year long affair with one Sarah Symonds. 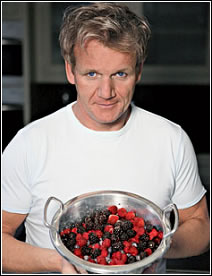 Gordon Ramsey, the British celebrity chef, is said to like the buzz of poppers.

Miss Symonds, a self-styled "professional mistress" (isn't there a shoter name for such girls??), is the author of a "manual of everything a woman involved with a married man should know" (Having an Affair? A Handbook for the Other Woman; Phoenix Publishing, 2007).

One November night in 2008, Miss Symonds was apparently foolish enough to finally allow herself to be tracked by the News of the World to a London hotel for a bedroom date with Ramsey – right after "browsing a Soho sex shop where she spent £30 on three small bottles of amyl nitrite, branded Rave and Rush".

According to the News of the World —

arah said Gordon had specifically asked her to go to Soho and get him some poppers for their romp. He likes the buzz."

The sales of Miss Symonds' book soared as a result of the subsequent media attention. Meanwhile, the reputation of Gordon Ramsey—who had marketed himself as a devoted family man— suffered somewhat.

“Pot and poppers – they
brought us together.”

That claim was made one Steven Johnson, a Welsh DJ who apparently started dating Charlotte Church when she was just 16. 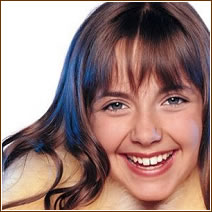 Unless you are British, you might or might not have heard of Charlotte Maria Church, a Cardiff, Wales girl from a Roman Catholic family who became a classical singing sensation at the age of only eleven. (Her first album, Voice of an Angel, was published by Sony Music in 1998.)

Just a short five years on, the then 16 year-old Catholic girl was apparently well versed in how to enhance her nights in —

ex with Charlotte was always crazy ... (The night we met) she inhaled (a joint) deeply. It wasn't her first time. She took a few more pulls, then sniffed from a small bottle of poppers, which gives you a sort of head rush."

If Mr Johnson is to be believed, that is. His comments came less than two years after the star singer dumped him (amid allegations Johnson had cheated on her), by which time he had managed to write—and was about to publish—a tell-all book about their time together.

There is so much politicians and the media keep from the public. Thank God their former aides sometimes write books to fill us in on what was "really" happening. 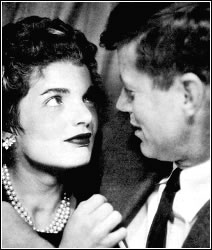 John F. Kennedy, pictured with his glamorous wife Jackie in this photobooth snap.

The Kennedy brothers' entry on this list should please all pleasure-seeking Americans, since all the others listed so far were British by birth.

If we are to believe the account of Richard Burke, the aid to Ted Kennedy (the senator), and the account of Mimi Alford, the mistress of his president brother John F. Kennedy, both boys were rather keen users of amyl.

In a book titled "The Senator: My Ten Years with Ted Kennedy," (published 1992) Mr Burke recalls an incident in 1979, in West Hollywood, as Ted Kennedy's motorcade passed a series of "head shops". As Mr Burke tells it, the senator wanted him to get out of the car and run into a store to buy him stimulants —

want poppers, Ricky. I want poppers.
I really want them. I'm all out."

According to Mr Burke, this was not a one-off incident.

The now 69 year-old Ms Alford appears to be something of a colorful character. While she may now protest she never used poppers voluntarily, her book—"Once Upon a Secret: My Affair With John F. Kennedy"—includes admissions of her "pleasuring" members of JFK's circle. (As well as her firm denial of ever "pleasuring" JFK's "baby brother" Ted. Let's pretend we believe her.)

You can, as the saying goes, take all these stories with a pinch of salt. Scandal-laden "historical" accounts by aging authors are not always the best source material, and neither are tabloid newspapers.

There is a discussion about who, when & why uses poppers. How about you? Can you share your experience? Or have you any scandalous, poppers-related celeb gossip to share? ;-)