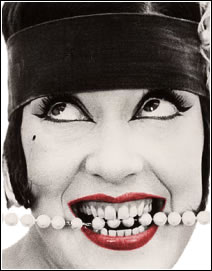 Poppers have been around a lot longer than you might think. Partygoers used to pop as early as in the 1920s – they just called the stuff 'amyl' back then, not poppers yet.

oppers affect the user on two levels: physical and mental. In tandem, the effects on the two separate planes can—and do—create something of an exhilarating experience.

The physical effects of what we now call "poppers" have been well known, understood and documented since the early 1900s (amyl nitrite, the original "popper" was discovered over fifty years earlier, in 1844).

All poppers—that is compounds belonging to the alkyl nitrite family—increase the user's heart rate and dilate blood vessels, thus promoting a freer, faster flow of blood throughout the body, including to the brain.

To this day, medical science has not investigated nor explained psychoactive effects of poppers, primarily because of lack of research interest in the area. (The lack of interest is likely due to the fact that the recreational use of nitrites does not create any troublesome societal issues—unlike the abuse of many other substances—because nitrites are not physically addictive and are generally safe to use.) 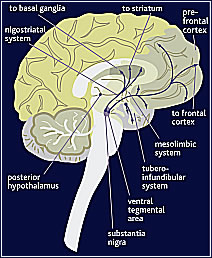 Brain's dopamine pathways. Poppers (alkyl nitrites) are thought to act on opiod receptors, which then release the neurotransmitter dopamine (DA), which in turn stimulates the pleasure center of the brain.

One fairly recent neurological study (by RL Balster, 1998) did attempt to explain the effect on the brain, only to conclude that "conclusions are difficult to draw" – although it noted that "some evidence" exists that alkyl nitrites may bind to opioid neuro-receptors in the brain.

Another (anecdotal) opinion is that the inhalation of poppers causes a mild, short-lived oxygen overdose, since poppers cause oxygen-bearing blood to rush to the brain with a greater speed and in a larger quantity than normally. I have not, however, been able to locate any independent study that gives any credence to this view.

Based on my subjective experiences, I believe Dr Balster's suggestion (that poppers bind to brain's opiod receptors) is closer to the truth. Substances that bind to these receptors have the ability to —

— and poppers do all that.

But there is more. For many decades, users have reported that poppers —

Yes, poppers are all about intensity. They will intensify your environment, and any activity currently performed – be it a sexual act, a night out or even skydiving (yup, some skydivers do take a sniff for to get that extra thrill out of the experience).

It depends on who you ask.

I have already tried to explain—on the "What are poppers?" page—that poppers are far from being the exclusive domain of homosexuals.

Many people still hold this opinion though, because for decades now, most researchers and writers have focused on one particular effect of poppers only. The following quote is from Medical Aspects of Human Sexuality; (Labataille, 1975) —

Thank you, Mr Labataille, for your diligent research and the description of the mechanics of the matter :-)

But even many gay commentators have attempted to claim the little bottle for themselves and their own. Hank Wilson, a gay activist and a manager of a notorious San Francisco hotel had the following to say (in 1993) —

Although none of the above quotes is factually incorrect, they do not tell the whole story. The statements focus solely on poppers' ability to relax involuntary muscles and decrease the perception of pain – which in turn promotes the opinion that bottom fun is the only thing poppers are good for.

t is very much a recreational sex drug. People typically use it just before orgasm, because it subjectively prolongs the time and increases the intensity"

That, again, doesn't tell the whole story – poppers also increase lust, to the point of bringing about a raw, animal-like sexuality. They decrease any inhibitions the user may have had before taking a sniff. They increase sensitivity to touch all over the body. They deliver a sense of exhilaration, acceleration and a total focus on the current moment in time, to a point of excluding outside distractions. In short, poppers intensify the experience – both on a physical and mental level. Sometimes they even fill the mind with changing patterns of color and shape, often containing symbolic representations of the sexual act taking place.

Simon Sheppard, the author of Hotter Than Hell, Kinkorama, Sex Parties 101 and other books, sums it up well —

oppers can make mediocre sex good, and good sex spectacular. Instead of being 'me having sex', I become sex itself, and the experience can be overwhelming."

But poppers have their uses outside of the bedroom, too. (And no, I don't mean any casual al fresco encounters now :-) In a paper titled Amyl Nitrite and the EEG: A Pilot Study (published in 1979), Thomas P. Lowry, M.D. noted —

myl nitrite has been used since at least 1920 as a psychedelic drug." 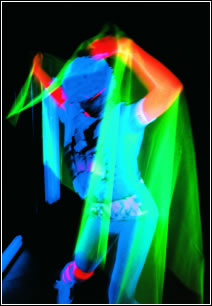 Will a good bottle of poppers brighten up your night out? You bet! Widespread use of poppers amongst clubbers started with the 1970s disco era.

Partygoers used to snap ampules of amyl nitrite for recreational purposes for almost a century now – but it wasn't until the seventies when poppers use really took off on the disco scene of the time.

By the eighties, the cheap, effective and fast-acting substance found its firm place on the dance floor. Its popularity increased even further in the clubs, parties, and raves of the nineties. The trend continues to this day.

In a club setting, poppers intensify the audio experience of loud, fast-paced music, as well as visual experience of the effects produced by the club's light system.

Just as in a sexual context, clubbers also benefit from the loss of inhibitions, which makes both dancing and socializing a more satisfying experience. The relaxation and contentment that poppers bring about also push peripheral thoughts of day-to-day issues to the side, allowing the user to fully immerse himself in and enjoy the immediate present.

Yes, it is the capability of poppers to instantly exalt any current moment in time, any current experience—in any given setting—that makes the substance so desirable.

That said, I wouldn't recommend taking a rollercoaster ride (or similar) with an open bottle in hand. When spilled on your skin, poppers will burn you unless washed away immediately. You have been warned.

How to. How fast. How long.
And how often.

Poppers are mostly administered by inhaling the vapors directly from an open bottle. One or two sniffs are enough to deliver the desired effect. 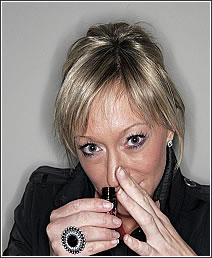 Ruth Bayer takes a sniff. As one of her artistic projects, Ms Bayer has photgraphed people on poppers, trying to—in her own words—"capture the effect it has on the user".

The effect is immediate, but only lasts about a minute or two, which is why you can never overdose on poppers, and which is why poppers are not physically addictive – alkyl nitrites leave the body quickly.

When used to enhance a sexual experience, most people will take about three to four "doses" during the act – though this of course depends on the actual length of the act and your own preference. Some people only reach for the bottle once, just before climax.

Clubbers who use poppers to enhance their night out usually take a sniff every time before hitting the dance floor. A small bottle will easily last all night even when shared amongst a group.

I personally use poppers only once (rarely twice) a week. Although nitrites are safe and not addictive, anecdotal evidence suggests that excessive use can create a tolerance to the effects of the substance – meaning you might end up needing ever larger and more frequent doses. Remember that poppers are thought to act on your brain's dopamine (pleasure) pathways. If you use poppers several times a day, your body will likely attempt to self-regulate the (unnatural) over-stimulation.

I have set up a discussion about the effects of poppers. Read what other people have had to say, or join in with your opinion!