Poppers are safe. But... 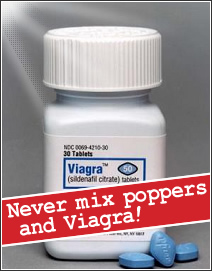 There are online stores out there that sell the two together, often on the same page, without any warning whatsoever. I find that kind of haphazard attitude infuriating. Seriously: the two do not mix well. In extreme cases, the mix may prove incompatible with life.

ost of the substances sold as poppers (amyl nitrite, isobutyl nitrite or isopentyl nitrite) are sold as "liquid incense" or "leather cleaner" nowadays. Although these descriptions are technically correct (yes, amyl will clean your leather belt just fine), this is not what most people buy poppers for.

My point is, if you are going to "do" poppers recreationally, you might as well stay safe – so do read on before taking a pop.

Perhaps the most important thing to know is that inhaling poppers will cause a short-lived but fairly sharp drop in your blood pressure. Consequently, you should never use poppers with any other substance that will do the same – especially not together with sildenafil, the active ingredient found in drugs for erectile dysfunction.

It also goes without saying you should not use poppers if you, for whatever medical reason, suffer from a low blood pressure.

Poppers also increase your heart rate (hence the head rush effect as more blood is pumped into the brain), so you are best advised to stay safe and give the amyl a miss if you suffer from any cardiovascular condition or irregularities.

Other than the above, poppers are about as safe as a substance can get. A ranking study of recreational drugs for harmfulness, ordered by the British government and reported by The Independent newspaper in 2006, concluded that—

oppers pose little harm to individuals or to society when compared to other recreational drugs."

According to a study published in The Lancet a year later (2007), poppers ranked 19th out of 20 for dependency risk and "physical harm" (alcohol came 10th and marijuana 11th).

Government advice aside, there are some things you should definitely not do with poppers. It's all common sense, but let's list the potential hazards anyway—

Poppers are not physically addictive because nitrites leave the body quickly, well before there is any chance of developing a dependency – so you can indulge pretty much as often as you like. That said, if you overdo it, you might experience—

If any of that happens, open a window wide and take a deep breath. The side effects rarely last more than five minutes.

The last thing to note is that poppers do impair your judgment. Euphoria is the word, and you may well end up doing stuff you wouldn't otherwise do—including risky sex—so do yourself a favor and slap on that rubber before you take the first sniff.

I have set up a discussion about responsible, safe enjoyment of poppers. Please join in if you have anything to warn others against. Perhaps you overdid it once, perhaps you indulged in a wrong situation... What would you advise others never to do with poppers, or when "on" poppers?